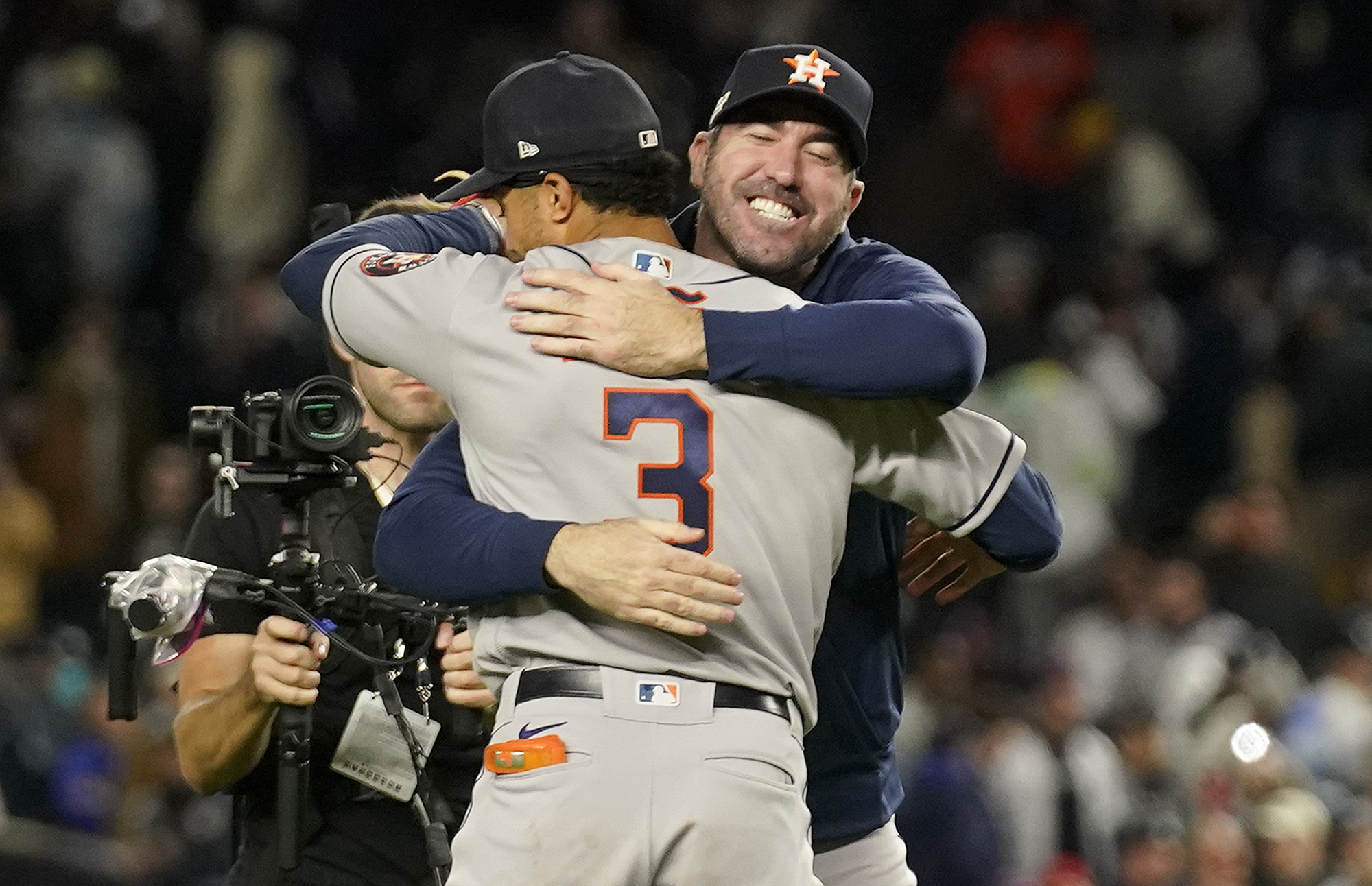 AP photo by Seth Wenig / Shortstop Jeremy Pena (3) hugs pitcher Justin Verlander after the Houston Astros beat the host New York Yankees 6-5 to win Game 4 of the ALCS on Sunday and sweep their way into the World Series against the Philadelphia Phillies. Game 1 is Friday night in Houston.

HOUSTON — Justin Verlander was answering questions about his upcoming start for the Houston Astros in Friday night's World Series opener when a member of the opposition took the unorthodox step of walking into the interview room to extend a hand.

"Where did you start your career again?" Philadelphia Phillies executive Dave Dombrowski said with a grin.

As general manager of the Detroit Tigers, Dombrowski made Verlander the No. 2 pick in the 2004 amateur draft.

"He's still wearing the same cologne," Verlander told his audience. "It's a very distinct one. I remember that smell."

Verlander has a nose for success, not just fragrance — it was Paul Sebastian, Dombrowski said later. The 39-year-old right-hander likely is headed to his third Cy Young Award in his first season back from Tommy John surgery, going 18-4 and leading the majors with a 1.75 ERA this season to give him a 244-133 career record and a 3.24 ERA in 17 seasons.

Yet he remains in search of his first World Series win after going 0-6 with a 5.68 ERA in seven starts in the Fall Classic.

"This guy's pitched well," Verlander's former manager in Detroit, Jim Leyland, said in a telephone interview. "These guys are human. They can have a bad game every now and then. And if it's on a big stage, it gets magnified a little bit."

Houston has already swept the Seattle Mariners and the New York Yankees in these playoffs and could join the 1976 Cincinnati Reds as the only teams to go through the postseason unbeaten since the division era started in 1969. The Reds won seven games in their unbeaten run, but the Astros will have to go 11-0 to complete the feat.

Aaron Nola starts for the Phillies, the first third-place team to reach a World Series and a franchise that has brought just two MLB titles to Philadelphia — compared to five won by the Athletics before leaving town after 1954.

Houston is in the World Series for the fourth time in six seasons and second in a row under 73-year-old manager Dusty Baker after losing to the Atlanta Braves in six games last year. For a significant segment of fans, the 2017 Astros who won it all are remembered as cheaters, the fallout from the scandal in which Major League Baseball determined Houston used electronic aids to steal pitching signs and signal its hitters.

Verlander is one of five players from that team on the roster for the best-of-seven matchup with Philadelphia, joined by second baseman Jose Altuve, third baseman Alex Bregman, first baseman Yuli Gurriel and fellow pitcher Lance McCullers Jr.

"At this point in the season, personal goals like that just don't matter. Try to win the game however you can."

Verlander is starting a World Series opener for the third time. He lost to the St. Louis Cardinals as a rookie in 2006, giving up a two-run homer to Albert Pujols, and to the San Francisco Giants in 2012, allowing a pair of long balls to Pablo Sandoval. Verlander was acquired by the Astros at the trade deadline in 2017, five years after winning his first American League Cy Young Award; he added his second in 2019.

None of the success surprised Dombrowski, who was with the Tigers through 2015 before spending five years with the Boston Red Sox — they won the 2018 World Series — and joining the Phillies in 2021.

"When he was in the minor league system, I told our broadcaster, Jim Price, I said, 'Jim, I know this is high ground, but I said I'd compare him to Nolan Ryan,'" Dombrowski recalled.

Verlander throws nearly as hard as he did at his peak, averaging 95 mph this year with his fastball, 1 mph less than in 2009.

"He was able to locate that fastball up in the zone, where it looked like a good pitch to hit but they couldn't get to it," Leyland said.

He has only improved during his time in Houston. Verlander mixes in sliders and curves, and he throws a couple of changeups per game, often in a key situation.

"One of those things that just comes with time, logging innings, instincts," he said. "I've talked to some guys before about what I see, and I've come to realize just not everybody sees what I do. I don't know exactly why. I would assume it's just paying attention and pitching for a long time."

Phillies manager Rob Thomson had no doubt about giving the ball to Nola for the first Friday opener in the Fall Classic since 1915.

"He actually just told me right when we stormed the field," Nola recalled of Sunday's pennant clincher. "We hugged each other, and he told me then."

Thomson, a baseball lifer who coached for the Yankees from 2008-17, moved to the Phillies in 2018 and took over when Joe Girardi was fired on June 3. He is seeking to join Bob Lemon of the 1978 Yankees and Jack McKeon of the 2003 Florida Marlins as the only midseason replacements to manage an MLB champion. He is the first Canadian to manage a team into the title round.

"I'm a proud Canadian and I love my country. I love what we stand for. But to tell you the truth, I'm just happy to be managing a team in the World Series," he said.

Baker noted he may have a spiritual edge this year.

"Last year was the death of Hank Aaron, and also we were playing the Braves. So the way I look at it, much as I like Hank and as much as he loves me and each other, he was probably rooting for the Braves last year," Baker said. "I figure now he's rooting for me."