ATLANTA (AP) — It's time to put away any thoughts that Cordarrelle Patterson's move from wide receiver to running back was destined to be a short-lived experiment.

The 31-year-old Patterson again showed he is more than a novelty item on the Atlanta Falcons' depth chart. He set a career high in rushing for the second time in three weeks by running for 141 yards and a touchdown in Atlanta's 27-23 win at Seattle on Sunday. He ran for 107 yards in the second half.

Patterson faded badly in the second half of last season as he appeared to wear down following his move to the backfield.

This year's additions of veteran Damien Williams and rookie Tyler Allgeier provided options if Patterson couldn't again prove he was capable of taking the lead role at running back.

Patterson still looks like a receiver as he wears No. 84, but the Falcons remained committed to the veteran as their starting running back. He has proved the point.

With Williams, expected to be Patterson's top backup, on injured reserve with a rib injury, Patterson led the Falcons (1-2) to their first win.

Patterson set career highs with 120 yards on 22 carries in a season-opening 27-26 loss to New Orleans. His lead role changed when he and Allgeier each had 10 carries in a 31-27 loss at the Los Angeles Rams in Week 2.

Patterson again was Atlanta's dominant back with 17 carries against Seattle. Allgeier had six carries for 25 yards.

A key to Patterson's success has been the Falcons' improved run-blocking. The offensive line overcame the absence of starting left guard Elijah Wilkinson, who missed Sunday's game because of undisclosed personal reasons.

Patterson averaged 8.3 yards per carry, setting another career high, against Seattle. His production is crucial, as coach Arthur Smith is determined to establish a running game. The Falcons rushed for 179 yards and have topped 175 yards on the ground in two of their first three games for the first time since 2010.

“I mean even though he’s 31, he’s continuing to evolve, and he works to improve,” said Smith of Patterson. “And it’s fun to coach him.”

Quarterback Marcus Mariota threw only 20 passes against the Seahawks, completing 13 for 229 yards with one touchdown and one interception. 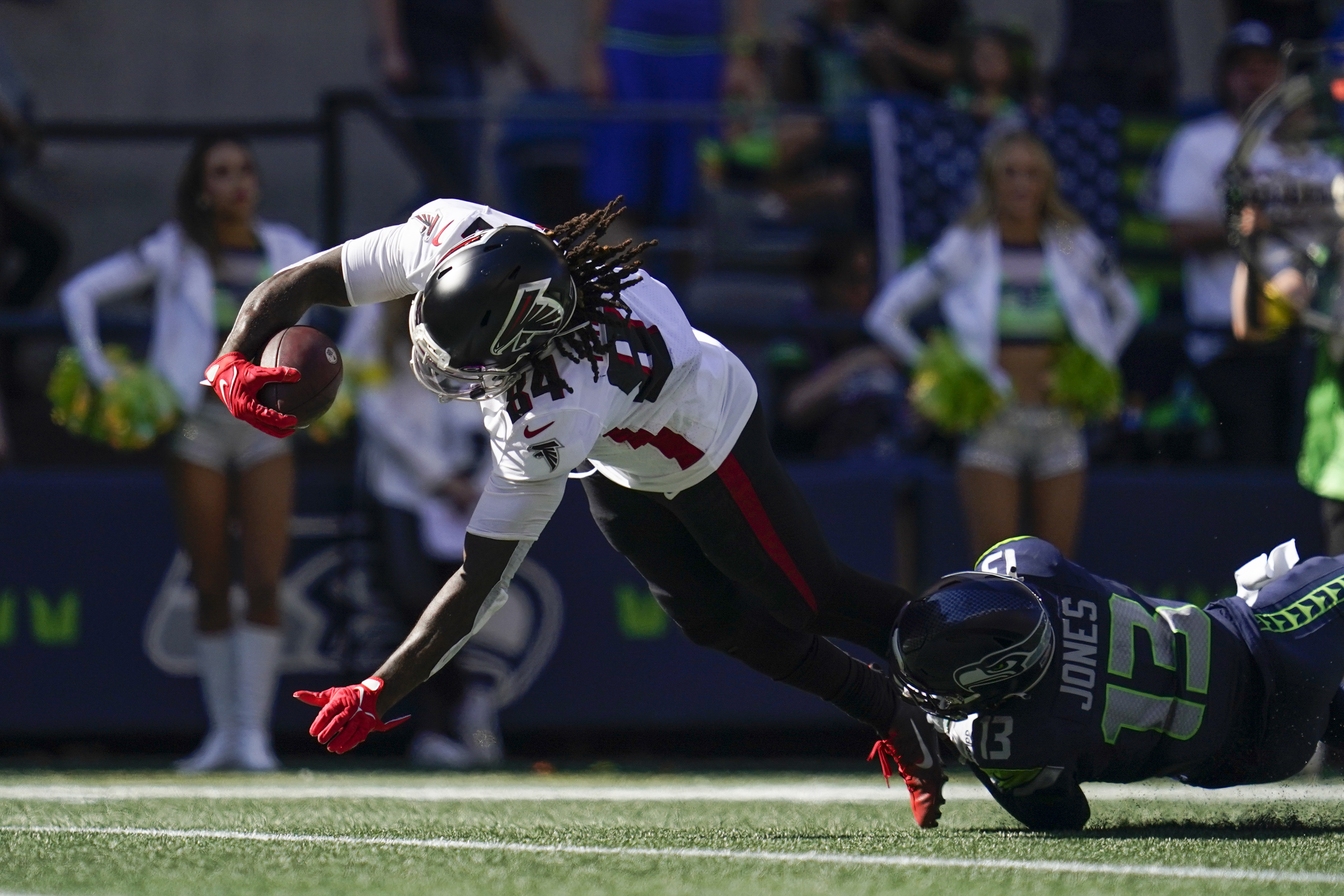 The Falcons continue to enjoy strong play from the middle of their defense. Inside linebackers Rashaan Evans and Mykal Walker and safety Richie Grant are Atlanta's leading tacklers. Evans and Walker combined for 21 total stops and Evans had a tackle for a loss against Seattle.

Turnovers remain a concern. Mariota threw an interception and lost a fumble against Seattle. For the season, the Falcons have three interceptions and lost four fumbles. Through Sunday's games, only two teams in the league had more than Atlanta's total of seven giveaways. The Falcons have a minus-2 turnover ratio.

Tight end Kyle Pitts enjoyed his much-anticipated return to his rookie form, catching five passes for 87 yards on a team-leading eight targets. Pitts was held to only four catches for 38 yards in the first two games of the season after setting the team record for receiving yards as a tight end in 2021.

Smith said Pitts provides more than just catches and played an important role even when his receptions were down.

“As you really study the run game too, he’s really becoming a complete player,” Smith said. “It’s only going to benefit us in the long haul.”

Mariota was able to take advantage of both Pitts and this year's top rookie, wide receiver Drake London, in the passing game. London had three catches for 54 yards and a touchdown. It was London's second consecutive game with a scoring catch.

Though the run-blocking earned high marks, Mariota was sacked three times. He has been sacked six times this season. That's a high number for an offense which has averaged only 26 passes per game.

Smith said he expects Wilkinson to return to practice on Wednesday and will move back into his starting job that was filled by Colby Gossett against Seattle.

1 — The Falcons have only one run for 20 yards or longer this season. That came on Patterson's 40-yarder against Seattle.

The Falcons will try again to establish a home-field advantage when they play Cleveland on Sunday. The Falcons finished 7-10 last season despite a 2-6 home record, and they lost their first home game against New Orleans this season.