Every dog or cat owner knows that the road to your pet's happiness is paved with daily treats. It goes without saying that many animal lovers tend to pamper their dogs and cats with treats apart from their regular meals. While some purchase their treats in bulk, many of these have a high calorie content.

And just like their human counterparts, Fido and Fluffy tend to put on pounds during the winter months when it's too cold for their humans to take them on their daily walks. And that, as any pet owner knows, can lead to a whole host of health concerns and high vet bills.

Nooga Paws is one Chattanooga-area pet grooming/bakery/pet supply store that makes its own pet treats to ensure a healthy bite.

"We actually have customers who will come in on the exact same day every week to stock up on treats for their pets," says Raymond Williams, Nooga Paws store manager. "And we've been told that the pets always know when they are getting treats as soon as they see our bags in their owners' hands. And sometimes they can't wait -- they'll stick their heads straight into the bag to pull something out."

Give Them Something Healthy

Nooga Paws makes most of its treats in-house to ensure quality ingredients. But some people prefer making them at home.

"Dogs are family, too," says Maura Lambert. And just like any good "mom," she prefers making homemade treats over those storebought, bone-shaped biscuits in a box.

Her two dogs, Annie, a fluffy, 6-year-old white standard poodle, and Shelby, AKA "Doggy Llama," a mixed-breed dachshund, are both cookie monsters, Lambert says, and she indulges them any time they come begging for a treat.

"I never hold back," she says. "Life's too short. When Annie is outside, all I have to say is 'Annie, cookie,' and she comes galloping a full speed."

Williams says his only hope is that they don't dive right in and eat everything all at once, though dogs, just like their human counterparts, often cannot resist temptation.

"Sometimes you just can't stop a mischievous pet," he adds.

But Lambert noticed that a while back, Annie began licking and nibbling at her paws, and she started thinking it was the storebought cookies she was giving her, due to the food preservatives she read on the box label.

"That's why I started making them from scratch, and they love them," Lambert says. "I even have a dog bone cookie cutter someone gave me long ago. I started using it, and they are adorable, but it's much faster to just roll them out and cut them in squares and rectangles."

Lambert follows a basic recipe, but plays with it, sometimes using crunchy peanut butter rather than smooth, other times substituting mashed sweet potatoes for the pumpkin.

"We also made their food for a while, and though I know many people are very successful at this, we were not. It's time consuming, and they had some, ahem, intestinal issues," she adds.

1 teaspoon water, or more if necessary

Preheat the oven to 350 degrees F.

Combine flour, eggs, pumpkin, peanut butter, salt and cinnamon in a bowl; stir with a spatula until combined.

Transfer mixture to a work surface and work it with your hands until mixture starts to come together. Add 1 teaspoon water at a time (only if needed) to help make the dough workable, but don't add too much as the biscuits should be dry and stiff once baked.

Roll the dough to a thickness of 1/2 inch. Cut into 1/2-inch pieces and transfer to a baking sheet.

Bake in the preheated oven until dog treats are golden brown and crunchy, about 40 minutes. Let cool before serving to your dog.

Preheat oven to 350 degrees F. Add blueberries to a mixing bowl. If you're using frozen blueberries, smash them around a little with your mixer. This will help break up the big blueberries into smaller pieces and mash some of the juices out. If you are using fresh or dried blueberries, give them a rough chop so that they are easier to smush around in the dough. Add oats and combine with the blueberries, mixing well. Add flour, eggs, peanut butter and cinnamon.

Mix together until everything is mostly combined. Mixture will be a bit dry and crumbly. Add about 1/8 cup of warm water to the dough and mix until dough sticks together in a ball. If the dough still seems dry, continue adding warm water in 1/8- to 1/4-cup increments.

Next, flour a clean surface to roll out the dough with a rolling pin. Roll the dough to about 1/2-inch thick. It doesn't have to be perfect, but you don't want to make these really thin or they will burn. If you make them a little too thick, cook them for a little longer.

Cut out treats using your favorite cookie cutter. If you don't want to use a cookie cutter, you can also use a pizza cutter or sharp knife and cut into 1-by-1-inch squares or 1-by-2-inch rectangles.

Place treats on a cookie sheet lined with parchment paper or a non-stick baking mat. Bake for 40 minutes or until the biscuits are hard/crunchy. Let the treats cool, then store in resealable bag. 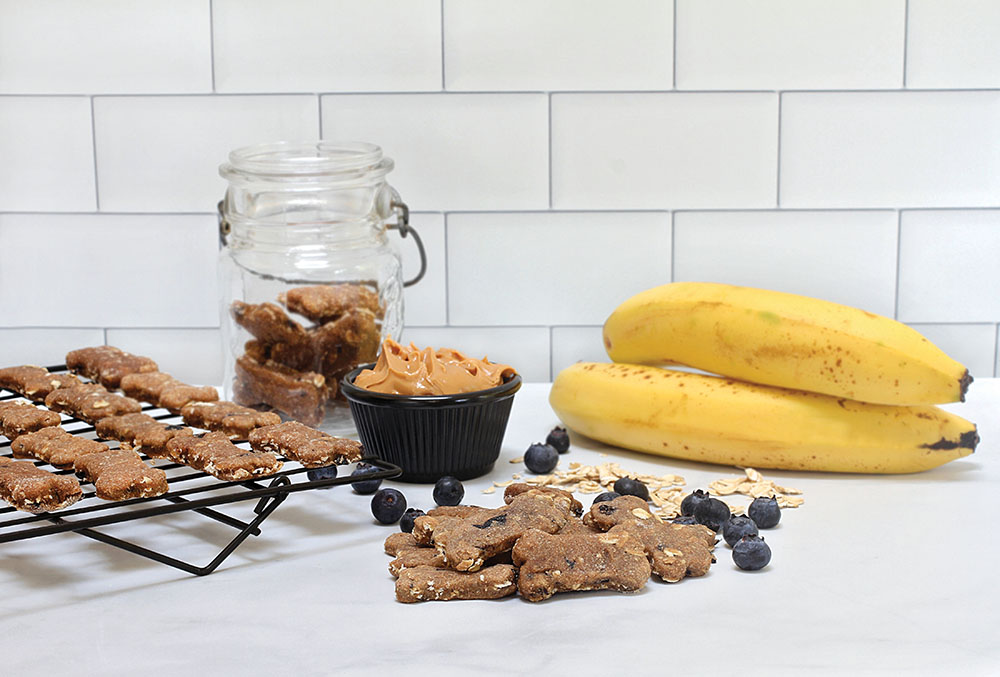