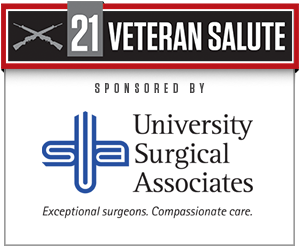 As a 19-year-old Army private on D-Day during World War II, Russell Pickett remembers being huddled in the back of an assault boat waiting to land on the beach at Normandy in northern France.

Pickett, a 93-year-old Soddy-Daisy resident, says he was armed with a flamethrower on June 6, 1944. His job was to cross several hundred yards of beach to take out a German pillbox, a fortified concrete gun-house overlooking the area the allied commanders had dubbed Omaha Beach.

Today, Pickett, who was reared in the Falling Water community and later became a well-known electronics repairman in Soddy-Daisy, still has a remarkable memory of the allied invasion on D-Day.

His weapon and other combat gear weighed about 110 pounds, he says, or more than two-thirds of his body weight. As the approached the beach in a British boat, the soldiers huddled near the back to help lift the nose of the craft in the shallow surf.

"We didn't make it, though" Pickett recalled. "We got knocked out just before we touched down. I'm not sure if we hit something, or something hit us."

Pickett remembers a deep rumble followed by a hole appearing in one side of the boat. The next thing he knew he was in the water, somehow stripped of his flamethrower by the force of the explosion. Helpless and unable to walk due to a back injury, he witnessed the carnage unfolding on the beach as thousands died in the assault.

To this day, Pickett wonders how things might have been different if he and his buddies had been able to help take out the German machine guns that rained down fire on the beach.

As it happens, Pickett was eventually evacuated back to England. And it was not be the last time he would be injured.

After a week of hospitalization, he was able to walk well enough to be sent back into the fighting. As the allied troops fought to liberate the city of Saint-Lo, Pickett joined a forward unit just as it encountered 25 to 30 advancing German soldiers. In the resulting fighting, Pickett was hit by grenade shrapnel in his left arm.

"They got me bad," he recalls. "I couldn't stop the bleeding."

This time he was sent to England for 21 days, before rejoining the front lines during the battle for the French port of Brest. He was in a foxhole when a enemy shell collapsed an earthen wall on top of him. He only remembers waking up in England in a state of shell shock.

"My nerves were completely gone," he says.

During treatment, Pickett said he nearly died. Twice, he remembers awakening to the sight of a "death curtain" drawn around his bed, only to remove it himself.

With three serious injuries, Pickett was eligible to be sent home to the United States, but he begged to stay in England, not wanting to return stateside until after the fighting was over.

After the war ended, Pickett eventually settled into a career as a radio and television repairman, but he never stopped helping fellow veterans. In recent decades, Pickett was trained as a Veterans Service Officer to help other vets receive their government benefits and services.

In 1994, Pickett returned to Normandy for the 50th anniversary of the D-Day invasion, and again in 1999 to help participate in the forming of an educational organization called the Normandy Allies. His personal World War II story is part of the script shared with students visiting the battle site, and the concrete pillbox is still in place.