Those were the last words two law enforcement officers heard from Marion County Detective Gene Hargis as they walked out the Sheriff's Office door Tuesday afternoon.

Their ill-fated THP helicopter's last mission was to search for illicit marijuana plots, but those plans changed with what was thought to be a more urgent call, Hargis told the Chattanooga Times Free Press.

Rather than join operations already underway elsewhere in the county that were part of work with the Governor's Task Force on Marijuana Eradication, Blansett, 40, and Russell, 35, had been reassigned to look for a man whose family said he hadn't come home, according to Hargis.

"That morning I had assigned Matt a missing person's case from Marion County," Hargis said Friday in a phone interview, his voice still hoarse and shaky from a harrowing week involving the deaths of his fellow detective and friend and the state patrol sergeant who had flown many missions with law officers across the region. "The person had been reported missing the day prior; he had gone to Chattanooga to get supplies and was supposed to have been home at 6 the prior evening and had not made it home.

"I knew that Matt was going to be with the helicopter, and he said, 'We will go up before we hook up with the other 'erad' team and fly Highway 41 to make sure we don't see his car off the side of the road,' because he would have taken that route -- Highway 41 -- from Chattanooga," Hargis said.

There was a call for a THP helicopter to help with a pursuit on Interstate 75, miles away from Marion, Hargis said, but the chase was called off before the Blansett and Russell helicopter made it out of the county, and they returned to the missing person search.

Meanwhile, more information on the missing person started coming in.

"Matt gets the information he requested on the missing guy's phone 'ping,'" Hargis said, referring to the signal a phone company can use to gain location information from a network cellphone.

"So they're already in the air, and they're flying 41; they end up in Lookout Valley at a motel where the phone pinged from," Hargis continued with a deep sigh with the fresh memory. "He texted me a picture about 30 minutes or so prior to the crash and said, 'This is where the phone pinged. His vehicle is not here. We're headed back to the other group.'"

Less than 30 minutes later, Hargis said, he and other officers got the report of the helicopter crash.

The day after the crash, Hargis followed up with the missing man's family and was told the man had come home.

He recollected the last time he, Blansett and Russell saw and spoke to each other that day at lunch. The pair of officers had come back to the office with Subway sandwiches and soon returned to duty for the last time.

"As they were walking out the door, I said, 'Y'all be careful boys,'" Hargis said.

Blansett and Russell were killed around 4 p.m. CDT when the Bell 206 helicopter owned by the Tennessee Department of Safety "crashed under unknown circumstances on a mountainside" after hitting a high tension power line, according to the Federal Aviation Administration. The FAA said earlier this week it has no record of accidents or incidents for the helicopter that crashed and no record of accidents, incidents or enforcement actions for Russell.

The National Transportation Safety Board is the investigating agency in the crash, the FAA said.

An NTSB investigator was on the scene Friday to document the scene, examine the aircraft, request any air traffic communications, radar data, weather reports and to try to contact witnesses, according to an agency spokesman.

As part of the investigation, the spokesman said that the NTSB will request aircraft maintenance records and the medical and flight histories of the pilot.

NTSB officials said a preliminary report could be available in the coming weeks and noted a typical NTSB investigation could take 12 to 24 months to complete and determine a cause.

A South Pittsburg native, Blansett started his career in law enforcement as a dispatcher in town after he earned a degree in criminal justice, according to his obituary information from Rogers Funeral Home in his hometown. Blansett was also a county commissioner, along with his father, Donald Blansett, and his mother and sister both hold public office.

Blansett was a 1999 South Pittsburg High School graduate and four-year letterman in baseball and football. He was a member of the Pirates football team that claimed the state title in 1999.

Blansett's first taste of public service was as a member of the South Pittsburg Volunteer Fire Department, according to his obituary information, but the Marion County Sheriff's Office would be where he would find his professional home in 2002.

Blansett was the commander and training officer of the Sheriff's Office SWAT team and arson investigator and was instrumental in starting the county's police K-9 program.

"Matt would go out of his way to help people and always knew what was going on in Marion County," his obituary said, noting his love for the outdoors, his two sons and South Pittsburg First Baptist Church.

Crews from the Tennessee Valley Authority plan work to repair the damage to the utility's power lines over Interstate 24 starting early Sunday, according to TVA spokesman Scott Fiedler and the Tennessee Department of Transportation.

Between 7 a.m. and 11 a.m. Sunday, there will be a rolling roadblock on I-24 and the adjacent state Route 134 to allow TVA to pull cables across the roadway as they make repairs, according to a notice from TDOT.

Traffic control and state troopers will be in place for the operation, officials said.

— A celebration of life for Marion County Sheriff’s detective Matt Blansett will be held at 5 p.m. CDT Saturday in the South Pittsburg High School gymnasium with Pastor Jeff Lane officiating. The gymnasium is at 717 Elm Ave., South Pittsburg, Tenn.

— Funeral services for Tennessee Highway Patrol Sgt. Harold Lee Russell II of McKenzie, Tennessee, are at 3 p.m. CDT Sunday at Long Heights Baptist Church in McKenzie, Tenn. The family will receive friends at the funeral home on Saturday from 11 a.m. to 8 p.m. and Sunday, 1 p.m. until service time. 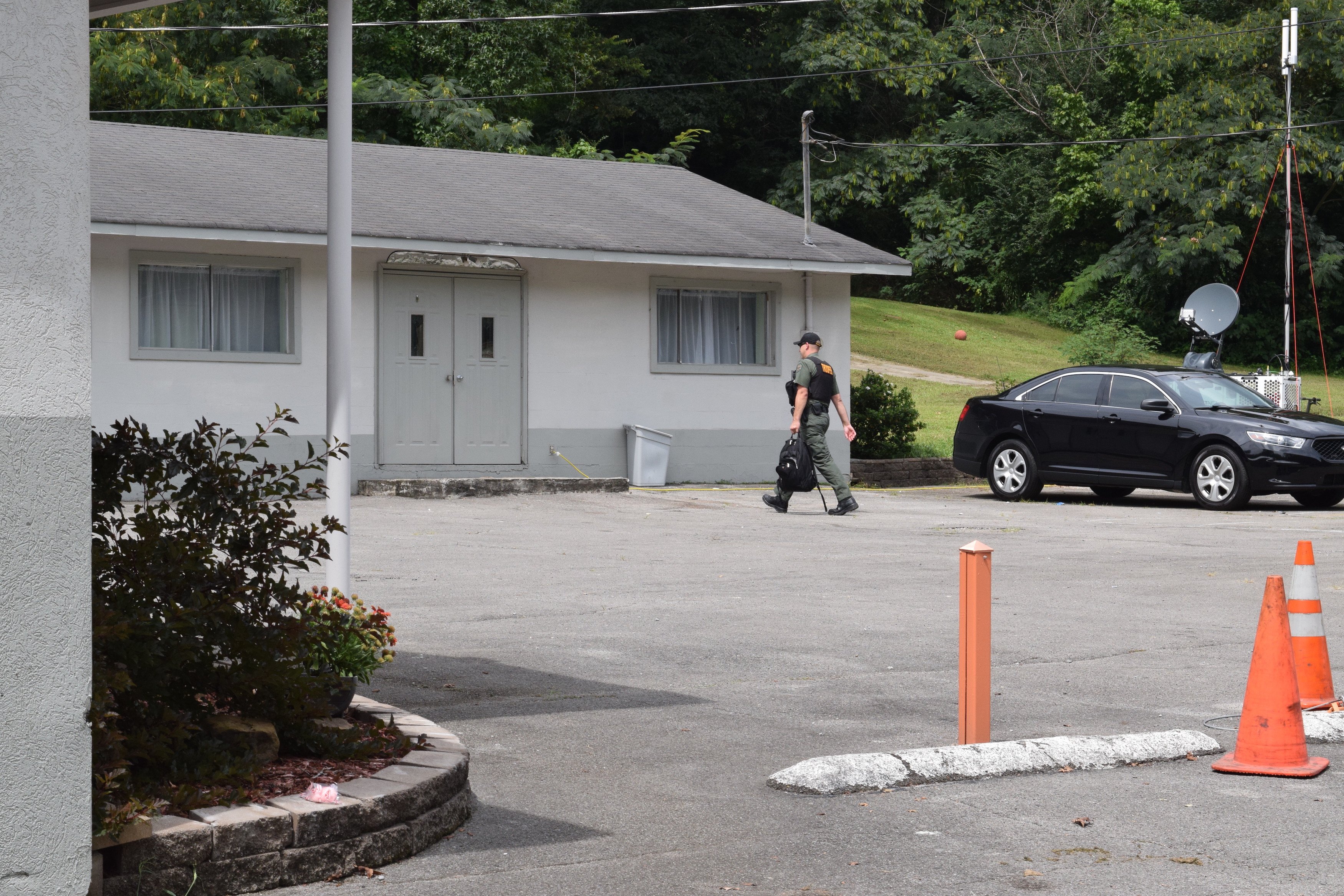 Staff photo by Ben Benton / A member of the recovery team walks into the Whiteside Church of God where officials met throughout the day Wednesday, Aug. 24, 2022, between trips to the crash site of a Tennessee Highway Patrol helicopter where pilot Sgt. Lee Russell and Marion County Sheriff's Deputy Matt Blansett were killed Tuesday after the craft struck high-tension power lines on Aetna Mountain.