District spokesman Steve Doremus said the school's counselor sent an email to families that included information about the Children's Advocacy Center, the organization that conducted the program.

"We teach these lessons through a curriculum supported by Children's Advocacy Center entitled Lauren's Kids," Doremus said in an email. "Parents are notified about the lessons and are able to opt their student out."

But Brian Bales, a parent of two boys who attend Snow Hill in Ooltewah, said he didn't receive any communication about the program.

"I hadn't heard about it, and we check our kids' folders every day," Bales said in a phone call, saying that he also didn't receive an email.

He brought the matter to former school board member James Walker, a Republican from Birchwood, who took to social media.

"I want to start this post by saying our Superintendent WANTS our help and NEEDS our help in ALL matters concerning our students!" Walker wrote on his Facebook page. "Stay in your 'lane' HCDE! Parents will take care of teaching their children these topics! You need to worry about reading skills! Quit putting this unnecessary garbage on our teachers! This was sent to me by an upset parent with a kindergarten and fourth grade student at Snow Hill!" 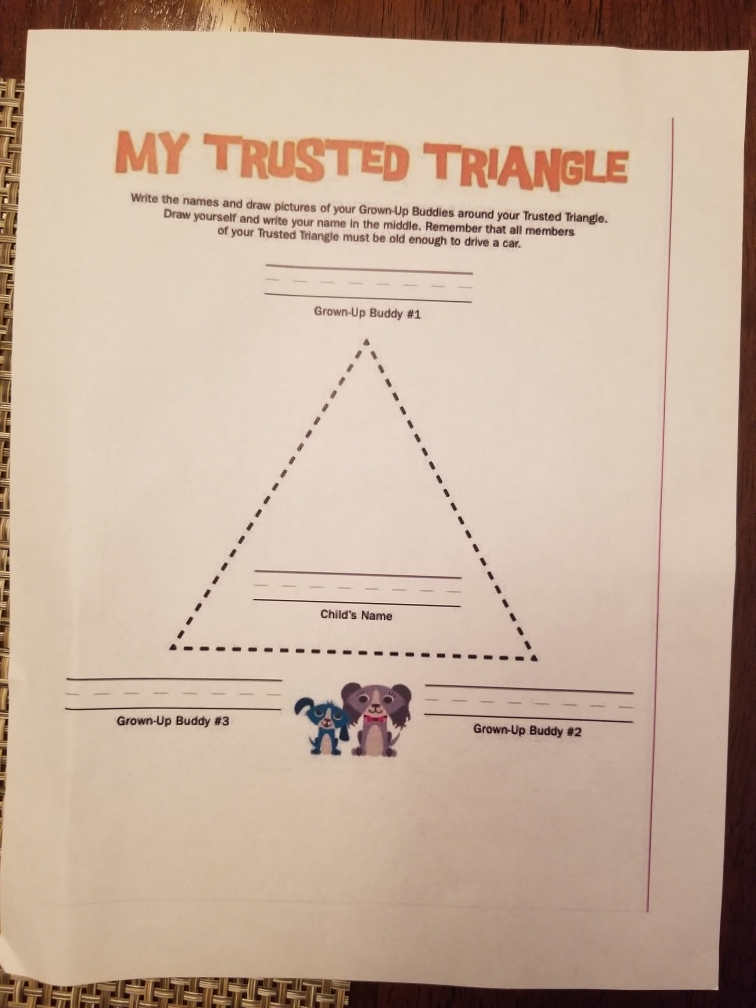 Photo contributed by Brian Bales/ Brian Bales, a parent of two children at Snow Hill Elementary, says he wasn't told about a child sexual abuse prevention program that went on during the school day and took a photo of the worksheets his sons were sent home with on Oct. 26, 2022

The post received 85 comments, many from parents saying they also hadn't been informed.

Under Erin's Law, Tennessee school districts are required to implement a prevention-oriented child sexual abuse program. Tennessee, Alabama and Georgia are among 37 states that have passed the law.

According to the Erin's Law website, the program must:

-- Teach students in pre-K through 12th grade age-appropriate techniques to recognize child sexual abuse and to tell a trusted adult.

-- Teach parents and guardians the warning signs of child sexual abuse and resource information to support sexually abused children and their families.

Bales said his son was brought into the cafeteria with other fourth graders and they were told a "visitor" was going to speak with them. The children also watched a video about good and bad touching.

"As a parent, I want to have control, which every parent should have control, of when and where your children learn about different subjects," Bales said. "I don't think it's the school's place or the school board's or the government's place to tell you where your kid needs to learn this or hear about this."

Bales said the district should consider an opt-in policy rather than an opt-out one.

"You shouldn't just automatically be put into a sexual discussion class when nobody knows about it," he said.

"What parents are telling me is that they were not informed," Walker said in a phone call. "And they would like to have other parents opt in. And they don't feel like they should have to opt out of stuff like that."

Hamilton County Board of Education Chairwoman Tiffanie Robinson said because child sexual abuse prevention education is state-mandated, the district does not need an opt-in policy. Many children would be at risk of not receiving the education if it were an opt-in policy, she said.

"If we made this an opt-in scenario, wouldn't a lot of kids get left in the dust because their parents aren't looking at anything either way?" Robinson said in a phone call. "If we're going to serve the greater good, you can't make everything an opt-in."

Walker said most parents and caregivers are teaching their children about sexual abuse. 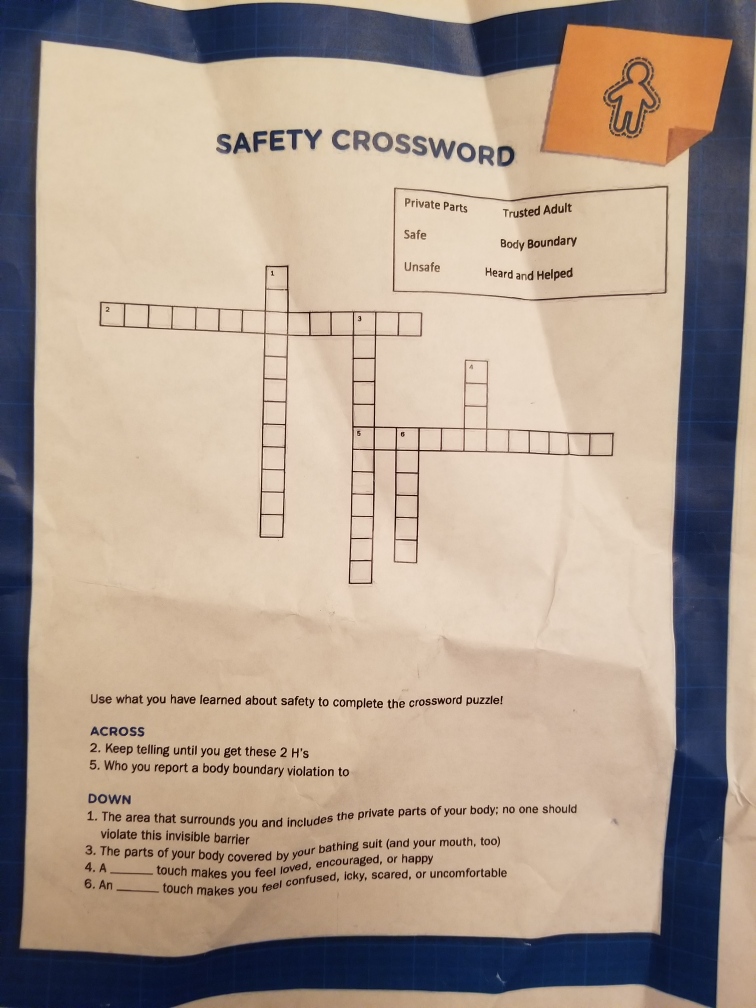 Photo contributed by Brian Bales/ Brian Bales, a parent of two children at Snow Hill Elementary, says he wasn't told about a child sexual abuse prevention program that went on during the school day and took a photo of the worksheets his sons were sent home with on Oct. 26, 2022

"That's what the narrative wants us to believe, that nobody's telling their kids about stranger danger and things like that," Walker said. "The majority of parents are talking about that."

Kristen McCallie, executive director of the Children's Advocacy Center, said while there's no way to know how many children are being taught about sexual abuse at home, instances of child sexual abuse in Hamilton County are at a record high. Between July 1, 2021, to June 30 of this year, the center saw 887 cases.

(READ MROE: Child abuse referrals on rise in Northwest Georgia after drop in 2020)

"Sexual abuse as a whole is a vastly underreported crime," McCallie said in a phone call. "Just generally, for every one case that's reported, there's five that are typically not. And that's a national statistic."

Ninety percent of the time, the abusee is someone a child knows, she said.

The Children's Advocacy Center has worked with Hamilton County Schools for several years and provides its curriculum and program to some elementary schools.

"We provide evidence-based programs for K-5 kiddos in Hamilton County, and we do that in compliance with Erin's Law," McCallie said. Each lesson and activity is catered to students' grades and ages.

She said teaching young children is vitally important to the prevention of sexual abuse.

"Perpetrators are folks that are going to hurt kids who are vulnerable," she said. "And, so, if kids have tools to be able to say, 'I feel uncomfortable,' 'I need to talk to an adult because this makes me feel uncomfortable,' regardless of any age, that's a protective strategy."

But Bales said not all children are capable of handling information about abuse and may misinterpret things like hugs or horseplay as sexual abuse.

"It makes innocent stuff look bad, and I think it's going to be hard for (children) to tell the difference," Bales said.

Less than 3% of reports are falsified, McCallie said.

Bales said he believes it's important for children to learn about sexual abuse prevention but is asking the district to communicate more transparently.

"I think it's a good idea if you want your kids to do it, but I think their approach was a little off with the way they did it," Bales said. "Hopefully, this brings some light, and maybe (the district) can change some ways." 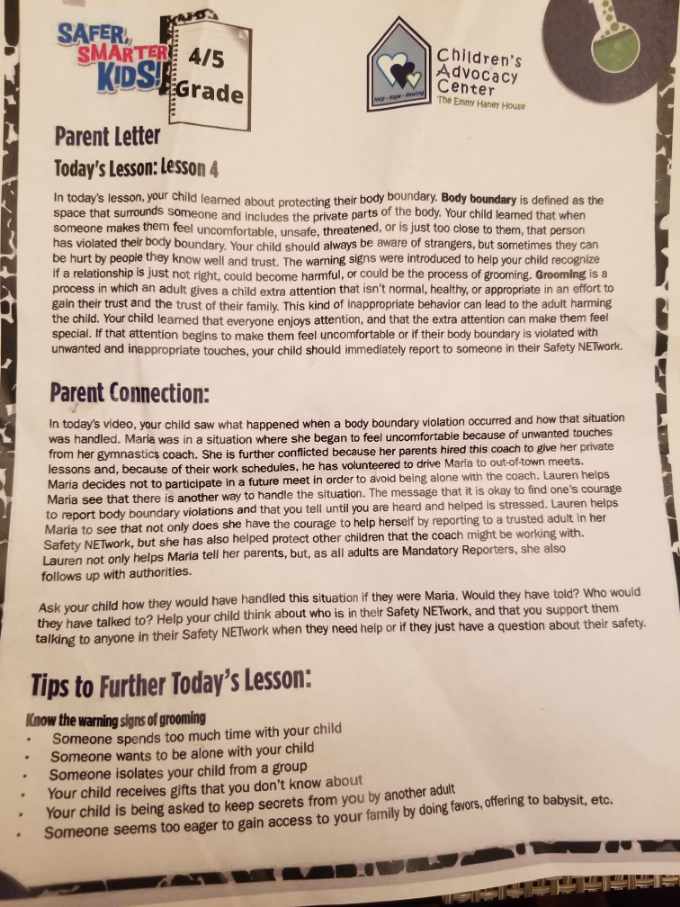 Photo contributed by Brian Bales/ Brian Bales, a parent of two children at Snow Hill Elementary, says he wasn't told about a child sexual abuse prevention program that went on during the school day and took a photo of the worksheets his sons were sent home with on Oct. 26, 2022
Advertisement
Advertisement