Long before the misty peaks along the Tennessee-North Carolina border were called the Great Smoky Mountains, the tallest of them was known not as Clingmans Dome but as Kuwohi.

In Cherokee, it means "the mulberry place."

On July 14, the Eastern Band of Cherokee Indians Tribal Council in Cherokee, North Carolina, unanimously passed a resolution proposing the original Cherokee name for the mountain just over the North Carolina state line be restored. The effort is gaining momentum with support from surrounding governments.

For the Eastern Band, the mountain is culturally, historically and spiritually important, and the name Kuwohi goes back thousands of years, according to tribal member Lavita Hill, who with fellow tribal member Mary "Missy" Crowe drafted the resolution passed by the Tribal Council. Hill works as a treasury specialist for the tribe in Cherokee.

Hill said Cherokees historically named land features in that way. She said a mountain might have been known as "Rattlesnake Mountain" because rattlesnakes were found there. The same is true for the Cherokee peak of interest.

"Mulberries were gathered at the base of the mountain -- typically below 3,000 feet -- and mulberries have many uses in traditional Cherokee medicine," she said, noting the native fruit is still harvested today.

The mountain was dubbed "Clingmans Dome" by the federal government in 1859, named for North Carolina Sen. Thomas Lanier Clingman, who played a role in exploring and surveying area mountains.

Two years after the peak was named in his honor, Clingman -- who served as a Confederate general -- was expelled from the U.S. Senate in absentia for "conspiracy for the destruction of the Union and Government."

(READ MORE: U.S. House votes 407-16 to return Cherokee lands, but no one takes up the idea in the Senate) 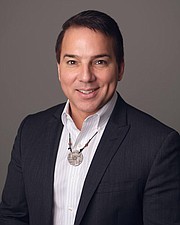 "For well over 99% of the time that human beings have occupied these lands, people have called the mountain Kuwohi, not Clingman," Hill said.

Hill said it's possible the mountain's most important role for many of the Cherokee was when they were marched on the Trail of Tears from their homeland. Many of those in the mist-covered mountains hid and avoided federal authorities.

"We as members of the Eastern Band of Cherokee Indians would not even be here today if not for Kuwohi," Hill said.

The federal government passed the Indian Removal Act in 1830, then entered the Treaty of New Echota with the Cherokee leaders in 1835, Hill said, with the goal being removing indigenous people to the east of the Mississippi.

"Any indigenous people you find today east of the Mississippi resisted this forced removal," Hill said. "We know that our ancestors hid in the caves and crevices of Kuwohi to avoid forced removal, commonly known as the Trail of Tears. Kuwohi is in fact the very reason we exist in our homelands today.

"It deserves to have its rightful name restored," she said.

Eastern Band Principal Chief Richard Sneed said the mountain name is part of a greater story of the indigenous people and the effort is about restoration.

"I think for our tribe and tribes in general, having the recognition that this was ancestors' land, our land, this is our home, is what this is about," Sneed said Friday in a phone interview. "It's about restoring the dignity for tribal nations."

Sneed said it is also important to note what the effort isn't.

"We're not trying to make this an attack on Clingman but rather an acknowledgment that there were names for this place already when these places were surveyed," Sneed said. "It's meaningful for us as a people."

Throughout the park and the country at large, Native American names can be found everywhere, the chief said.

"Tennessee gets its name from Tanasi -- there are lots of names of towns and even the states that derive their names from native people across the country," he said.

Restoring the name Kuwohi would tie the mountain back to Cherokee ancestors, Sneed said.

"I think it's appropriate, especially since the park is on what was originally Cherokee land," he said.

This moment of pursuing restoration of the name is also an opportunity to tell the story of the people who were here first, according to Sneed.

Situated on the east side of the Appalachians, the Eastern Band's home of Cherokee is a sovereign nation with its own laws, elections, government and institutions, as well as close relationships with federal and state governments, according to a historical account on the tribe's website.

The Eastern Band of Cherokee Indians were once part of a much larger Cherokee Nation population, but when the Trail of Tears was mandated in the late-1830s and forced removal and relocation were directed by the U.S. government and President Andrew Jackson, the Cherokee tribe became divided.

The three now-federally-recognized tribes are known today as the Cherokee Nation and United Kituwah Band, both in Oklahoma, and the Eastern Band, made up of those who remained and rebuilt within North Carolina's Qualla Boundary, according to Hill. The Qualla Boundary is sometimes called the Cherokee Indian Reservation.

Hill said Clingman family members have reached out to the Cherokee to show their support for restoring the mountain's original name.

"Tom Clingman has told us he fully supports our efforts to restore our name Kuwohi," she said.

Support for restoring the mountain name is spreading.

In western North Carolina's Buncombe County -- Cherokee's neighboring county to the east -- the Board of Commissioners passed a resolution declaring its support of the effort on Aug. 2, calling the move in a news release "a long-term shift in vision and truth-telling."

"The culture and language of the Eastern Band of the Cherokee exists today because of great determination of tribal members and their ancestors," Commissioner Parker Sloan said in the release.

"To the Cherokee, this mountain has always been called Kuwohi, and they have asked us, the people of Buncombe County and our government, to join them in their efforts to restore the original Cherokee name of Kuwohi to the mountain presently known as 'Clingmans Dome.' Buncombe County applauds our Indigenous neighbors' efforts and extends our sincere support," Sloan said.

(READ MORE: Our guide to Western North Carolina, a paradise for paddlers, hikers and cyclists)

Other neighboring North Carolina governments have also joined in support, including the Andrews mayor and Board of Aldermen and Murphy Town Council, Hill said, and so far there has been no political party divide.

Swain County commissioners Thursday night unanimously passed a resolution in support, Hill said Friday in an email updating the most recent moves. Hill said 42% of the Great Smoky Mountains National Park is in Swain County and the North Carolina side of the mountain is entirely in Swain County.

"We are in touch with local governments throughout western North Carolina and eastern Tennessee, and expect many more resolutions over the next two to three months," Hill said. "The reception has been incredibly enthusiastic. Every local government which has voted has passed the resolution of support unanimously, and with bipartisan Republican and Democratic support."

Sneed expressed his gratitude for that support.

"I'm very grateful for the partnerships and the sense of community in the region in showing they are in support of what we're trying to do," he said.

There are more steps to take before any name change becomes official.

"Once we have completed the process of gathering local support, we will go back before our Tribal Council with a completed application to the U.S. Board on Geographic Names," Hill said.

If the Tribal Council approves the application, it will be submitted to the Board of Geographic Names on behalf of the Eastern Band's government, according to officials. The board will begin a review of the history of the name and the proposed name of Kuwohi and will research the request and examine the local support.

"If the request is passed by the [board], Kuwohi will become the officially recognized name of the mountain by the United States government," Hill said, noting the process typically takes eight to 12 months but sometimes can take longer depending on various factors.