Kindergarten vaccination rates in Tennessee, a state once heralded for its childhood vaccination program, dipped to a record low of 93.7% in the past year, with Hamilton County falling among the least vaccinated counties in the state, according to a statewide report.

Six Tennessee counties -- Hamilton, Grundy, Van Buren, Maury, Fentress and Chester -- had fewer than 90% kindergartners fully immunized during the 2021-22 school year. Kindergartners in Hamilton County were 89.7% vaccinated, down from 91.6% the year before. Fentress County was the least vaccinated at 74.4%.

The figures come from an annual report conducted by the Tennessee Department of Health using data from public and private schools across the state, though 36% of private schools are not included because they did not complete the assessment. Homeschoolers and students enrolled in virtual learning only are also not included.

The growing number of kindergarteners missing required vaccinations means Tennessee communities are increasingly more susceptible to preventable diseases that at one time plagued the nation as school children across the state return for a new academic year.

Vaccination rates must remain above 95% -- a threshold that until 2021 Tennessee kindergartners consistently surpassed or nearly achieved -- to be at low-risk through herd immunity for highly infectious, vaccine-preventable disease outbreaks such as measles or pertussis, according to the report. Herd immunity occurs when enough people are immune to a disease through either vaccination or prior infection, and it's particularly important in order to protect people who cannot be vaccinated for medical reasons.

Polio is at risk of spreading if vaccination rates dip below 80-85%, according to Dr. Stephen Miller, health officer for the Hamilton County Health Department, who said in an email that while he's "not surprised" that vaccination rates are dropping, health department officials are "extremely concerned" that more families are opting not to vaccinate their children.

"These rates are similar to what we are seeing in the rest of the country," Miller said. "With the re-emergence of polio in New York and other developed nations, it's more prudent now more than ever to obtain these vaccines."

Since the COVID-19 pandemic, the number of Tennessee counties that meet the 95% fully immunized threshold decreased from 72 to 43 counties, representing a 40.3% decrease, according to the report. That means only 45% of Tennessee's 95 counties are at the 95% minimum threshold. 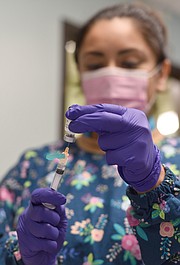 Dr. Heather Naggar, pediatrician and medical director at LifeSpring Community Health, said the vaccine program has become a victim of its own success, because the side effects of vaccines -- such as soreness or mild flu-like systems -- are more real to people than the diseases that they prevent.

"It's a gift in medicine when you haven't seen something long enough that you forget how terrible it is. When the general population starts to forget that, too, it's kind of a double-edged sword," Naggar said via phone. "People don't really see these diseases. They don't have a family member that has died or been an iron lug or is sterile because of measles. The disease itself feels very abstract."

Unlike many pediatric practices, Naggar said that LifeSpring doesn't require patients to be vaccinated, although the vast majority of patients at the clinic are fully vaccinated according to the U.S. Centers for Disease Control and Prevention and American Academy of Pediatrics recommendations. It's LifeSpring's stance that children whose parents are vaccine hesitant need good pediatric care, too, and providers consistently educate patients on the importance of vaccines, she said.

"We're always having those families work towards a time when they will vaccinate," Naggar said. "In some cases, those conversations are just great. It's worth taking more time to help people understand their health and the decisions that they're making to keep their children safe and healthy, and we always want to partner with families in that way. We don't want people to feel pressured or bullied into a health decision."

Though she hasn't noticed an increase in vaccine refusal in her practice, she said the conversations around hesitancy and vaccine concerns among parents have become more common since the pandemic.

"I feel like maybe they're getting more comfortable with the idea of a vaccine being a decision," Naggar said. "'Are you going to get vaccinated?' has become a question socially in a way that it never was before, and so parents are starting to think of this as a question and not as a requirement."

Each year, the state asks schools to evaluate required immunization records and classify each student as either fully immunized, exempt due to medical or religious reasons, or enrolled under a temporary certificate, which are granted when a child has not received all required vaccines but is in the process of completing them. When that documentation isn't available for a student, it's labeled as a missing or incomplete record, which was the case for 6.7% of Hamilton County kindergarteners last year.

Steve Doremus, communications officer for Hamilton County Schools, said in an email Friday afternoon that he was "still trying to find someone" who could explain last year's vaccine data for the district.

Snow Hill Elementary in Ooltewah had the least vaccinated kindergarten class in Hamilton County last year, with 68.6% of students fully vaccinated, according to a Times Free Press analysis of the state's data. Classes with fewer than 10 students were omitted from the analysis.

Last year, a record 2.3% unvaccinated kindergartners in Tennessee attended school under religious exemptions, up from 1.8% the previous year. None of the major faiths in the United States object to vaccinations, and report authors said this increase is "likely due to parents filing a religious exemption in lieu of a personal philosophical exemption."

Throughout 2021, school vaccine requirements were heavily targeted by some conservative Tennessee legislators who wanted to expand parents' ability to exempt their children based on "right of conscience." In Tennessee, parents are currently able to object to immunizations if their child is unable to take them for medical reasons or if vaccines go against their religious beliefs, but not if they philosophically disagree with vaccines.

Nationally, outbreaks of diseases such as measles, which at one time was eliminated in the United States but has since resurged, are becoming increasingly common as childhood vaccination rates wane.

The U.S. reported more than 1,200 cases of measles in 2019 -- the greatest number of cases reported in the nation since 1992 and since the virus was declared eliminated in 2000 -- according to the CDC.

Concerns around polio have also heightened after a young, unvaccinated adult in New York became paralyzed in July due to the virus, and a new CDC report shows that it may have been circulating there undetected since April. The New York case was the first report of polio in the U.S. since 2013.

Miller said it will take parents, caregivers, schools, doctors and the public health system coming together to improve vaccination trends.

"Vaccination is a highly effective, safe and easy way to help keep your family healthy. Vaccines protect against diseases and strengthen your child's immune system to help protect them from communicable diseases," he said. "Getting immunized protects you and those around you by limiting the spread of disease. The more people who are vaccinated, the less likely a major outbreak will occur."