Earlier this month, a room on the sprawling campus of Silverdale Baptist Church teemed with hectic energy. The 20-something people inside cheered when someone came in and dumped a huge pile of plastic bags atop an already huge pile on the floor.

At one table, Beth Longshore was fulfilling her role on the assembly line, cutting plastic bags into 3-inch strips, folding them flat and then rolling over them with a pizza-cutter-like knife.

"I cut the way Martha always cut," she said, referring to Martha Leonard, who died earlier this year.

Leonard was, in a sense, the reason they were all there. She founded this church ministry, now known as "Martha's Mat Ministry," dedicated to taking mostly recycled plastic bags, processing them into a thick, thread-like material and crocheting them into sleeping mats to be donated to the Chattanooga area's growing homeless population.

Leonard got the idea at a church ministry gathering in Gatlinburg, Tenn., years ago, Longshore said. She had an "exuberant personality that attracted people."

Susie Davidson, who helps organize the mat ministry, silenced the room with an announcement. That month, in addition to blankets and socks donated amid a cold snap, volunteers had brought in eight new completed mats -- bringing their total on the year to 127.

"While we know that we are not going to solve the homeless issue in Chattanooga by any means, we want to be as much of the hands and feet of Jesus as we can," Davidson said by phone before the event.

After Davidson's announcement, Longshore returned to her cutting. 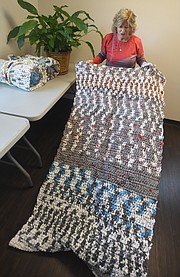 Most of the bags are donated used bags from Walmart and Dollar General. One volunteer estimated it takes about 700 bags -- often-crumpled -- to make a mat.

"It's easier to cut a new bag," said Longshore, adding that in her heyday, Leonard took advantage of the self-checkout option at grocery stores to snag extra bags.

When Longshore and her other cutters were done, the 3-inch strips of plastic went to another set of tables for further processing.

"People don't like me to have sharp things," joked David Anderson, one of the few men in the room, as he tied plastic strips together so they could be rolled up like yarn balls for volunteers to take home.

Anderson retired not long ago from the Tennessee Valley Authority and joined the group at Leonard's invitation, he said.

"I keep my mouth shut, and I don't get the real stinky job."

Another volunteer, Peggy Shipley, said sometimes the knots are too big if you aren't careful.

"I don't normally do this," she said, as she tied another knot. "I normally do crocheting."

She went across the room and kicked her way through a pile of black bags, causing them to mix with those of another color. She picked up a rolled up completed mat and counted out the stitches width-wise. She'd made about 100 of these mats, according to another ministry member.

Shipley said making each mat takes about four hours per day over the span of a week. She's been crocheting and knitting since she was 10. She does it while watching TV or listening to the radio, she said.

"Or in the summer I go out on the porch and watch the traffic go by," Shipley said.

Each mat comes with a laminated card displaying a verse of Scripture.

About a week later, on a Friday afternoon at a homeless encampment around 12th and Peeples streets, Jackie Jarnes' head poked out of her green tent, and with it came a couple tiny weeks-old kittens.

Emerging, she plunked down on a white, brown and blue mat -- made of crocheted plastic bags -- laying outside and tied her shoes and lit a cigarette. She said she got the mat not long ago from a truck that pulled up with food and other supplies. Her description of the delivery guy sounded like Gus Hernandez, the local missions and outreach pastor at Silverdale Baptist Church, who helps distribute the mats for Martha's Mat Ministry.

Jarnes, who is in her 50s, said she's attended Silverdale Baptist Church services a few times. She's from Middle Tennessee and became homeless about nine years ago, she said, when she was working as a certified nursing assistant helping out elderly people.

Her car broke, Jarnes said, making it harder to do the job, and eventually, she had to sell her East Ridge mobile home at a significant loss. She's spent some time in jail and worked various jobs since then, folding laundry, staffing a chemical plant – on-and-off homeless all the while. Now, she said, she cleans the home of a doctor, and her mom, too, with whom she's on rare occasions stayed in an arrangement that she said would not work full time.

"I thought, just work for yourself, try to hang on and live in a tent," Jarnes said. "And it's not that hard, except there is a lot of chaos down here."

Her kittens would sometimes claw at the mat, so now she generally keeps it outside, a kind of welcoming flourish for the tent, in which she sleeps on a cushion. But sometimes she's fallen asleep on the mat outside, by the fire, Jarnes said. It's relatively comfy.

"You don't wake up feeling like your hips's been broken in a car accident," she said.

Lots of people have the mats, Jarnes said, and she gave her's positive review. It's plastic, so the moisture comes right off. It cleans easily. It's lightweight and easy to move.

It can be used in all sorts of different ways, she said. "You can use it as a blanket if you need."